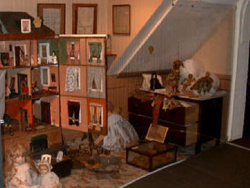 The Victorian Child’s playroom includes this dolls’ house, which was made by Charles de Lacy Lacy in the 19th century. He modelled it after Georgian house opposite his house in Grosvenor Street, and he filled the house with hand made furniture, pictures, ornaments and figures representing his family and domestic staff.

The pictures are copied from old masters. It has been played with by four generations of the family, each one adding to it, and it even travelled with them on holiday in a specially made crate. 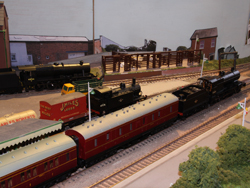 The Museum Railway Club have been working for several years on a 00 gauge scale model of the former Blandford Station which closed to passenger trains on 1966.

The model is operated with authentic locomotives and rolling stock and is set up to run automatically.

Alongside the model of Blandford Station the Railway Club is an interactive layout featuring ‘Thomas and Henry’ for children (big and small) to play with. 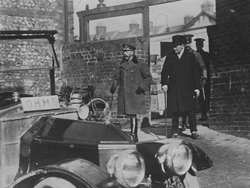 A replica of the station depicts the visit to Blandford during the first World War of the king (George V) and Winston Churchill as they alight from the Blue Train which was then running on the S&D line. The images and background were painted by Philip Le Bas. 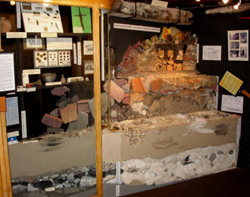 This display puts many of the artefacts at the museum into palae- ontological and archa- eological context.

In the main part of the exhibit are three archaeological levels shown on successive platforms in the display.

First the Stone Age, with bones and artefacts from the Palaeolithic, Mesolithic and Neolithic; second, the time of the Romans, showing the partly buried remains of a Roman building; and third, the Mediaeval period, with tiles, pottery and bone from this period.

At the top of the display is an accumulation of modern remains, what we know of as rubbish but which future archaeologists will analyse to show how 21st Century humans lived.

The display explains both the nature of archaeological remains and how we order time and how we view changes through time. 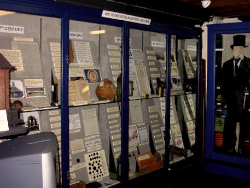 The Museum houses artefacts illustrating the history of Blandford Forum and the surrounding area. This exhibits highlights the major events of the last 400 years. Starting with the 17th century, each panel places events in and about Blandford in chronological order and context. Included in the display are several artefacts of local manufacture, such as the wonderful Dorset Buttons which Blandford was famous for. 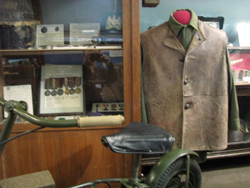 The museum houses a large collection of WW I and WW II artefacts. We have maps showing the remaining physical features still scattered about the town as well as objects of daily life during both wars.

There are many artefacts from both the fire and police forces that have operated in Blandford over the last 200 years. 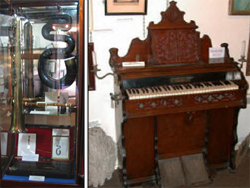 The museum has several antique instruments including a victorian pump organ, a large brass instrument called an Ophicleide and a black S-shaped instrument is called a Serpent.

The museum also has a beautiful clarinet made in the 1820s by Charles Barfoot of Whitecliff Mill Street in Blandford, it is made of boxwood and is in full working order.

The museum has also been given a selection of uniforms, banners and musical instruments of the Forum Marching Brass, a youth band formed in 1986. 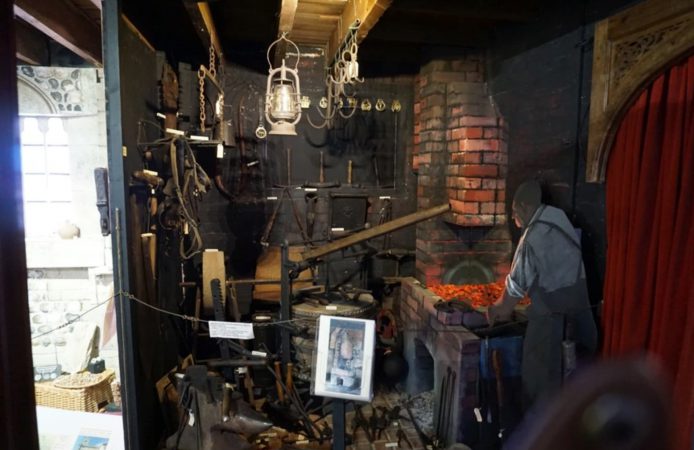 The display is a repro- duction of the forge constructed during the 1890s in the out-buildings of Diana Lodge to service the Portman Hunt horses. It was in use up to the early 1960s. The photo shows the hearth and chimney-work of the forge. When the house changed owners in 2000, the vendor donated the bellows and anvil to the museum.

Diana Lodge (formerly Shothole) is only about 300m from the Portman Hunt Kennels, a bit more than a km south west of Bryanston. The house, formerly a Georgian farm house, was converted for use by the Master of the Fox hounds and became known as Diana Lodge after the goddess of hunting. 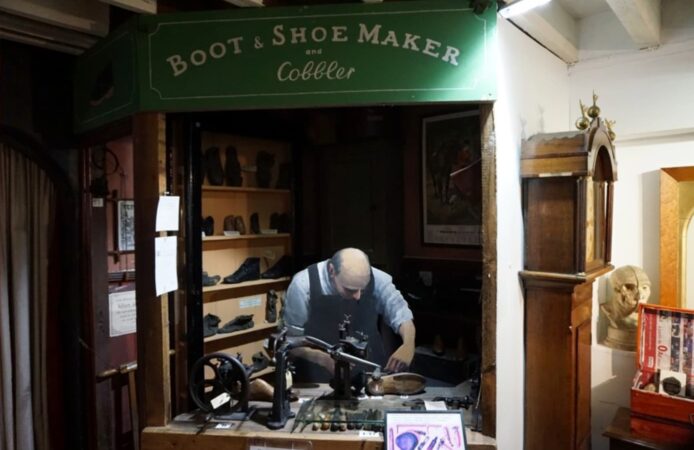 An almost complete cobblers shop was donated to the museum and is shown reproduced here. Shoe making is a complex process, with a range of machines to help the cobbler.

On display are machines to cut and split the leather, punching machines and many hand tools for finishing the shoes. Wooden moulds (called lasts) were made to match the shape and size of individual feet, and the leather shaped around the lasts.

Similarly, metal lasts were used for repairing shoes, and other machines for finishing, smoothing and burnishing the leather.