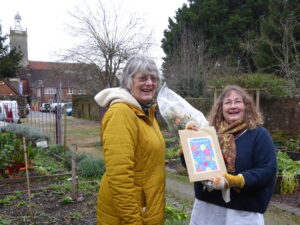 On a cold and damp morning in early January, several Museum trustees, members and volunteers gathered in the Victorian garden to celebrate the 70th birthday of our director, Sylvia Hixson-Andrews. Sylvia’s arrival was greeted by a rousing rendition of “Happy Birthday” (with harmonies!) led by Clara Tavernor and Colin Fletcher, who are well-known to many members for their singing at the Last Friday in the Garden events during the summer. 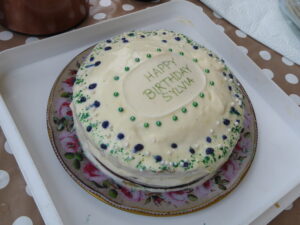 Chair Joy Reynolds presented Sylvia with a bouquet and some vouchers for a  relaxing Spa day, to which trustees, members and volunteers had contributed through a surreptitious collection at the Museum. Joy had also baked a cake, which went very well with the Buck’s Fizz and hot spiced apple juice.

A card containing many greetings and best wishes had been delivered to Sylvia on her birthday. The affection, admiration and gratitude with which she is regarded was summed up by this (slightly adjusted) song from Shakespeare:

‘Who is Silvia? What is she’
from ‘Two Gentlemen of Verona’ (William Shakespeare)

Who is Silvia? What is she – That all our swains commend her?
Holy, fair and wise is she; The heaven such grace did lend her,
That she might admirèd be.

And with a little adjustment by Clara and Colin:
Who is Sylvia? What is she – That organises all around her?
Without her skills where would we be?
A glass of red it doth sustain her, Well, just one … or two … or three? 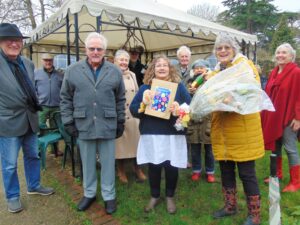 Some of the Museum members celebrating Sylvia Hixson-Andrews’ 70th birthday in the Victorian Garden. Photo by Nicci Brown