More about the Museum

A bit of History…

During the second half of the 19th century there was a museum above the grocer’s shop at Durden’s Corner (currently Scrivens Opticians). When Mr Henry Durden died in 1892, his collection was moved to the British Museum. 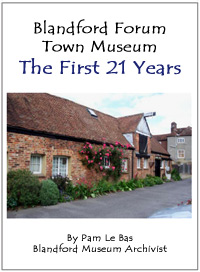 The booklet is available in the Museum Shop

Work to establish the current Town Museum in Blandford was started in 1974 by John and Sue Tupper. The building, which had originally been the coach house connected to the Bastard House, was acquired in 1979 through the generosity of the William Williams Trust. After substantial renovation work, the Museum was opened in April 1985.

The late Ben Cox, who was the original curator, deserves much credit for developing the collection and for initiating the archives, which now serve as a source of information for researchers working at the museum.

The development and growth of the Blandford Town Museum from 1974 to 2006 is described in this booklet by the late Pamela Le Bas. Ms Le Bas served in a variety of capacities, including as Museum Archivist, from 1997 to 2009. The booklet details the personalities involved and the difficulties encountered, as well as describing the museum as it is today and its mission in preserving the heritage of the Blandford area.

Since 2006, the Museum has continued to change with the times. Peter Andrews, our Emeritus Curator, has emphasized the community aspects of the Museum and integrated many of the artefacts into contextual exhibits. He is supported by a team of Research and Curatorial staff who ensure that the Museum’s collection and archives remain up-to-date, relevant and accessible.

The Museum has a variety of special interest groups and projects, including the Archaeology Group and the Victorian Garden Group, and we formed the Blandford Environmental Trust in partnership with Blandford Rotary and The Blandford School. We also share information and learning boxes with schools and have active learning programmes for people of all ages. Our aim is to be a true community museum, with something for everyone.

The museum is available to hire from £10/hour on Wednesdays or in the evenings. We can accomodate 20-30 people depending on the layout and facilities that you need. We have computer projection facilities and a small kitchen area that can be used to prepare refreshments. Please contact us to discuss your requirements.

Council of Management and Trustees

Click here for details of our Research and Curatorial Staff