Three days before the Hallowe’en Floods in Blandford, and less than a week after the previous flood, a group of 40 people gathered in the Ham carpark for a very timely guided tour of the Flood Defences in Blandford.  The tour was led by two Environment Agency representatives: Flood Resilience Engagement Officer Henry Quinney, and Mike North from the local operational team. 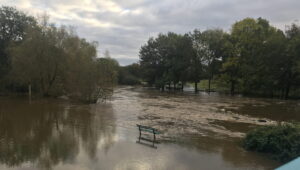 Downstream of the Mortain bridge, just a few days earlier

Joy Reynolds, Chair of the Blandford Town Museum, welcomed the participants and explained that the tour had been arranged as part of the Museum’s Stour Valley Project, which is looking at the way the River Stour has influenced the development of Blandford and neighbouring villages.  Blandford has a long history of flooding and some of the people present could remember the floods of 1979 when boats were paddled through the Market Place. Henry explained that the disastrous floods that year triggered the decision to build the flood defences in Blandford.

He and Mike explained that the Environment Agency constantly monitors river levels upstream, allowing them to predict when unusually high flows of water are going to hit Blandford.  They normally have several hours notice to issue a warning that the gates in the Lower Ham Car Park are going to be closed, completing the flood barrier that runs from the bank in the water meadows and becomes the wall across the Ham Car Park and behind properties in the Market Place and East Street.  They emphasised how important it is that people observe the warning notices or they could find their vehicle floating in Christchurch Harbour! 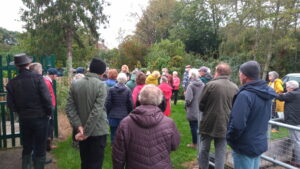 The group walked across the Mortain Bridge, along the river through the Stour Meadows and back over the Preetz Bridge to the Pimperne Brook Pumping Station, in Marks and Spencers car park.  Henry and Mike explained how the Pimperne Brook, which is usually dry during the summer, starts to flow in late autumn as the water table on Cranborne Chase rises. When the Stour is too high for the Pimperne stream to drain into it, the water is pumped from the Pimperne Brook back into the Stour. The pumping station also removes surface water from the Ham Car Park, and has its own generator to keeps the station operating if there is a power cut.

The tour was very informative and enjoyable, and we hope that Henry will be returning to give another talk at the Museum in 2022.